Giving back to our community is at the core of who we are. It’s no wonder then that our history of giving back was inspired by a Rush team member!

Over 23 years ago, Jenny Adams joined the Rush Companies. Jenny has cystic fibrosis (CF), a progressive, genetic disease that causes persistent lung infections and limits the ability to breathe over time.

As the walk grew, so did Rush’s volunteers and donations.  Jenny recalls Founder Gordon Rush saying, “As long as Rush is making a profit, CF will get a donation.”

Gordon was true to his word—Rush has been the premier sponsor of Great Strides’ Pierce County walk for 25 years. As the premier sponsor, The Rush Companies donates on average $10,000-$20,000 each year. Rush also underwrote most of the event for many years and Rush employees did all the legwork, setup, rentals and coordinated food service for each event until 2008 when the CF foundation took over that effort.

As the walk grew, it was eventually moved to Park Plaza, which has saved the walk $5,000 in rental fees—all of which went right to CF research. Park Plaza has been home base for the Great Strides Pierce County walk for the past 15 years. 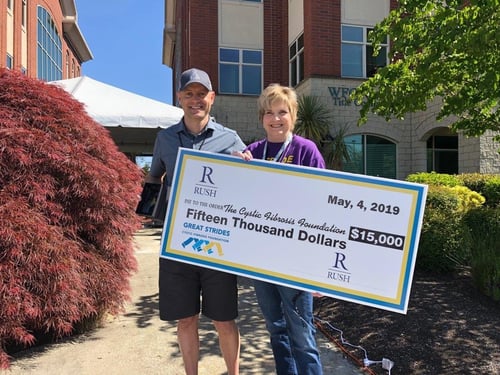 While Rush has contributed financially and through volunteer hours to the organization, most importantly, the support has impacted Jenny.

“More than anything both Gordon & Matt (Smith, Rush President) continue to support CF, and also me personally. They both have walked with me through 5 years on the transplant waiting list until I received my new lungs in April 2016. Even through my tough post transplant issues they have continued their support,” Jenny said. “All the funds raised have been poured into the pipeline for new medications. This directly impacted me and helped to provide new medications that have extended my life expectancy.” 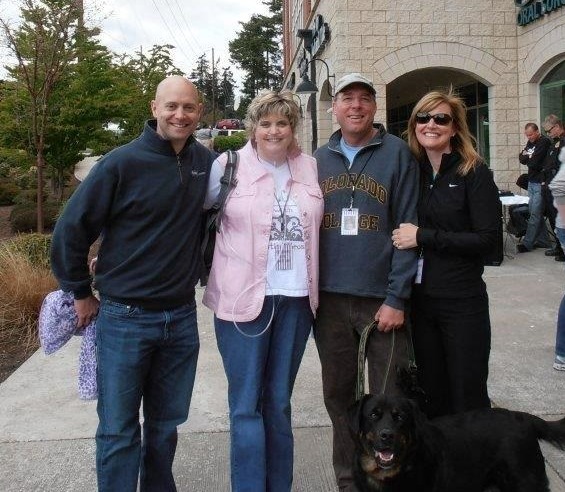 We are so grateful to Jenny, who has inspired the heart of Rush and spurred us to get involved in so many other incredible local causes for over 35 years.

Route: The walk starts at Park Plaza walking onto the Cushman Trail to the Reid Road parking area (halfway point) then turning around and walking back to Park Plaza. The walk is approximately 3 miles long.

Starbucks will be providing coffee and pastries before the walk starts, BJ’s will be providing the after walk lunch, pizza and root beer. We have other vendors who will be handing out snow cones, water, pop, fresh fruit and other exciting things…

This is a wonderful family event, dogs are allowed but only if they are leashed, pickup after and play well with others. There will be security at the walk along with the Gig Harbor police.

At Rush, we believe in giving back to the communities we live and work in. We were proud to partner with incredible organizations in 2022 that serve...
Read More
Philanthropy, The Rush Companies

Each and every one of us knows someone - a parent, a child, a friend, a colleague - who has suffered from cancer. Thankfully, more and more people...
Read More
Philanthropy, The Rush Companies

We are excited and honored to announce that The Rush Companies is in the top 100 Puget Sound Business Journal's Best Worplaces, Large Company category
Read More